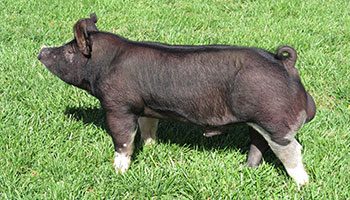 When the Maucks called to tell us they had one of the most intriguing Berkshire boars they had ever raised, we didn’t waste any time going to Gaston to see for ourselves. Kentucky Lovin’ blew us away from the second we laid eyes on him due to his sheer width of skeleton, stoutness of bone and muscle expression. This one takes so many positives to the extreme that Berkshires need in terms of muscle mass and bone that it’s scary! Put all that on a skeleton that is sound and athletic with a choke necked front end and we feel like Kentucky Lovin’ can be the next big thing in the Berkshire breed!! Probably the most exciting characteristic about Kentucky Lovin’ is his color pattern! He is marked and carries a pedigree bred to make them more traditional Berkshire colored and should eliminate a lot of excess white found in some of today’s pedigrees. The blood runs deep and close on this one as he is a Gary Coleman bred back to his mom! Winning Berkshires are loaded in this one’s pedigree as Gary Coleman babies have dominated the showring and a littermate barrow to Kentucky Lovin’ won his class at the Indiana State Fair Junior Show! Tap into the still of making Berkshires that are destined for the winner’s circle with a taste Kentucky Lovin’!!!!