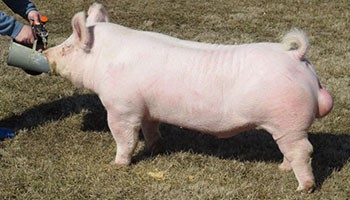 When we select a boar to put into the stud, we become very picky and put them thru a ringer of criteria to make the cut to join our team. When it’s one that we raise ourselves, that criteria is even sterner. It was very apparent from a young age that DOUBLE TAKE was on a fast track to passing that test. From a pedigree standpoint alone he had us very excited. Sired by Take Notice, the $55,000 Fall Classic Champion in 2013 and out of our BOLO sow; who is a littermate to the $100,000 Final Proof. She was our $5,500 purchase at the WPX in 2013 and has quickly become a cornerstone for us. Her first litter produced a very popular third place gilt at Louisville in 2014 along with a gilt that sells for $7,000 in the open show there. DOUBLE TAKE is the result of her second litter, along with a littermate sister who was named Reserve Division 2 Champion at the Southeast Regional. The thing that excites us the most about DOUBLE TAKE is his phenotypic characteristics. This one is super heavy boned and incredibly stout featured. Huge legs and monster feet. He is tall fronted and jet level. He has a big stout head that is extended and cool looking. Muscle shape and mass to burn with a big rib cage. He is powered up at the ground and motors around the surface with ease. This one all thru his life has always presented that look that makes you stop and take a DOUBLE TAKE. Make that same impression in the ring with your DOUBLE TAKE!!!