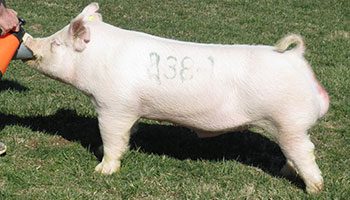 LIGHT THIS X THE PROPHET

It isn’t every show that you get a boar come along that possesses those next level pieces capable of impacting the breed in a forward manner. Those are few and far between and are often sought after by a variety of people. The exact scenario presented itself in Belton, TX at the Southwest Type Conference in the way of the Reserve Champion Yorkshire Boar! It took $40,000 to own this beast and we’re excited to have him here! Big thank you to Sanders Showpigs & Jason Leigh for teaming up with us on this guy! Royally bred being out of Light This, son of the $95,000 Lit Up, and out of a sow sired by $130,000 boar, The Prophet. That sow was the $17,000 3rd Overall Yorkshire Gilt at OYE in 2016. A littermate sister to the boar was the $9,000 7th Overall York Gilt at the 2018 OYE!
Divergent is an absolute monster of a Yorkshire boar!! Incredibly heavy boned and stout in his feature. Huge feet and toes with a gigantic rear leg. Up on his toes and strength of pasterns for this breed is the most impressive part. Crossbred mass and muscle with a bold, robust turn to his rib. Power and mass at any view point but flawless in his build and range of motion. Perfect to put on belted sows to make blues even. We have never owned a Yorkshire boar quite like this one. Aspire to be different. Aspire to be Divergent!!!