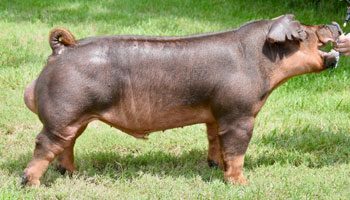 Over the last few years there’s been a strong emphasis put towards building one of the best Duroc sow herds in the country at Adam Beck & Family Showpigs. Time has been spent, trips taken and investments made to secure those elite females that have surfaced. The biggest splash made was with the purchase of the $35,000 Record Selling Duroc Gilt at the 2016 STC. This gilt was shown by Hadley Hendrickson, bred by Don R Smith, and sired by Indian Outlaw. She is also a littermate to Bear Claw, the $35,000 STC boar that stood here. Her impact in just 3 litters have been greatly felt; producing the $20,000 Sweethearts Gilt in 2017, several replacement daughters and most recently, Last Drop! After the run that He’s the One had been on, it was a no brainer to match that sow with him. From what we were told, this mating came out of the very last collection of He’s the One resulting in the origin of his name! Last Drop gets us excited with where we feel Durocs are headed and where we think he can take us! So balanced and fault free in his skeletal make up. Awesome pattern from the side that is dead level from blade to hip with that trendy, slick look up front. Square and true off both ends of his skeleton with great length and agility to his stride. Stout constructed with big bones and big feet. Muscle shape is cool and expressive when you get on top of him. Frame size and length of body are ideal and tie him together nicely. We feel this one is right for the times and can make those Duroc shows hogs that are easy on the eyes. Keep your red program good until the Last Drop!!!