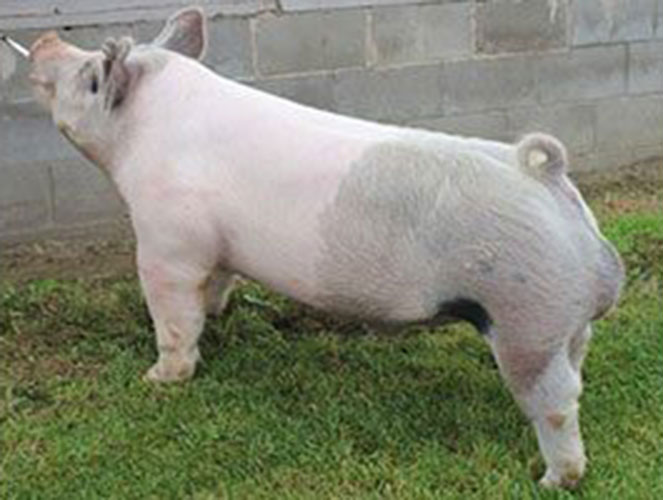 This is the second half of the pair purchased from Heimer in the ‘Chosen Ones Sale’ this fall. It took $7,100 to bring this calico to Clayton, but we couldn’t be happier. Not since Shoot ‘Em, have we had one this extreme in terms of stoutness. His legs are monstrous and his feet are huge! He is moderate in length of body and ideal in frame size. This stress negative boar is level down his spine while being tall shouldered with a good look to his front end. His center body cavity is enormous as he has a huge rib cage with great depth. We get asked all the time for boars that will add bone…here he is! Phenotypically he has it and his pedigree reads to generate it. He is a Gone Viral X Camel Toes and the 18-2 Frank Davis sow is embedded deep in this one’s pedigree in several generations. Gone Viral has set a blazing trail for making winning show hogs and Camel Toes (Priceless X 18-2) ensures that added stoutness will be passed on. The mother of Contagious is a key piece of Jesse’s program as she produced Show Me UR Swag at The Stud in her first litter. Jesse told us that Contagious has been popular since he was a little guy and the response we have received on him thus far has been overwhelming. If you’re one of those breeders chasing bone and stoutness to add to your program then make sure you catch this one because it’s Contagious!!!