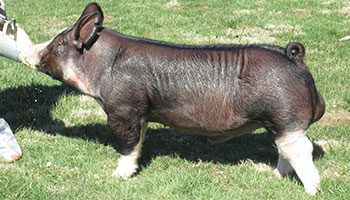 The Berkshire breed is something we’ve taken serious and put great pride into since the beginning! We have been fortunate to have some elite Berkshire boars here on stud and feel like we currently have one of the deepest sets of them available anywhere. Going into Belton, adding another one wasn’t at the top of the list but when we saw how good that show was, there were a couple that needed to come to Clayton. The Reserve Champion is one we liked a bunch and are excited about the opportunity to have him available to offer. Thanks to Hood & Lawson for their faith in us and in their boar to retain interest in him! Law & Order is a unique individual in our minds. Short bodied, big ribbed and busted open with a killer, modern day look to his front end. Stump legged with big feet and a killer running gear. Backed with incredibly potent genetics to boot! Non Typical has been super dominant in the Berkshire ring and this one’s mom was the Champion Berkshire Gilt at the 2016 OYE. Law & Order comes from a deep litter too, as his mate sister was named Champion Gilt there at Belton and another sister was 5th Overall Berkshire Gilt at 2017 OYE! We love this one’s phenotype to make those championship caliber Berkshire barrows and his winning pedigree only helps solidify those chances! Bring justice back to the Berkshire ring with Law & Order!!!