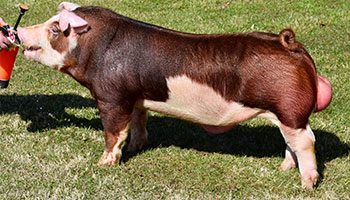 Our entrance into the Hereford breed has finally arrived! One that we’ve explored over the years but up until now hadn’t been able to land that headliner we wanted for our initial spot on the scene. Making strong plays to own boars like Red Sox, Family Guy, and Never Say Never, we wanted to make sure when we put one in he fit that kind of status. We’re excited to have Stronghold here to make available to use. We got the opportunity to see this one early in life and was one impressive baby. Staying updated on his progress through maturity, when the time came to make a decision we were all in! Thank you to the Corya Family for sharing him with us!
Stronghold comes from an impressive litter and generating sow family. His littermate brother caused quite the stir in Oklahoma being named Champion Hereford Barrow at the 2018 OYE! His mother won her class at the IN State Fair 2016 and her littermate was the Champion Hereford Gilt at the 2016 Team Purebred Jr. National in Springfield. The grand dam of Stronghold also produced the $10,000 litter for a Corya in 2016 that yielded the 5th Overall Hereford Gilt at the 2017 WPX Jr. National! Red Rum is the Doug Loof bred boar at Justin Coyle’s in Oklahoma that you’ll be hearing more about going forward. A powerful pedigree to back an incredible Hereford boar!
Stronghold is impressive to view from the profile as he is level from blade to tail, tall fronted and sleek headed. Square and opened up underneath with a big chest. Correct in his hock set and rear leg placement. Range of motion and flexibility is impeccable. Stout featured and heavy boned for his breed. Bold and robust about his center body with a wide, shapely back. Super balanced and complete. The right pieces to progress the breed forward with current trends. Good marked too! We’re pumped to be in the Hereford business and excited to have one like this in place. Take over the Hereford show ring and make it your Stronghold to the backdrop!!!