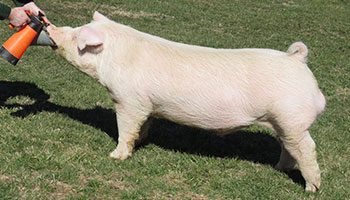 JACK IN THE BOX X SCREENSHOT

The Chester breed has been very fortunate to us in our short tenure in the business. We’ve been humbled to have had 2 National Sires of the Year in that breed and has been fun to see their legacy impact the breed. In the same breathe, we’ve always got to have our ear to the ground hunting that next piece of the puzzle. When the Ammann crew called us early about a pair of boars they had, it immediately caught our attention. Over the course of a few videos and a farm visit it was apparent they needed to be here!
Sired by the popular Jack in the Box boar and out of Screenshot sow who is a flat generator. She was the Champion Chester Gilt at the IN State Fair Jr Show and Reserve Chester Gilt at Springfield. She was part of a highly successful litter that included the Champion Chester Barrow & Reserve Chester Gilt at the IL State Fair. Her first litter blew it of the charts producing the Reserve, 3rd, and 4th Overall Chester Gilts WPX, 5th Overall Chester Gilt at Springfield, and Reserve Chester Gilt at STC. Not only did the Jack in the Box litter yield these 2 powerhouse boars, it also contained the 5th Overall Gilt & Champion Chester Gilt at the TP Southwest Regional and 5th Overall Chester Gilt at San Antonio! Generating power for sure!
Take Aim is a specimen to view in person. Awesome from the side, tall fronted and level in his hip. Sleek look up front with a stout skull. Body mass, muscle shape and substance is impressive. Stout in his bones and impeccable in his running gear. Flexibility and range of motion is flat incredible. The way this one balances is awesome! We think this thing along with his brother will be the next big thing! Set your sights and Take Aim at the competition!!!