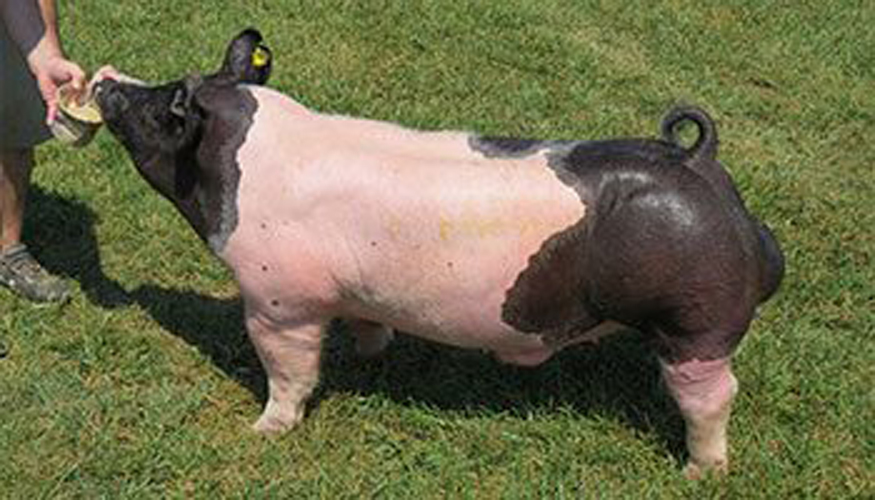 The Crossbred Classic is the show we look forward to the most every year due to the depth of quality found in the boars that show up there. We headed there this year with the intentions of laying in the final key pieces to our Fall 2013 set and when Dig Deep hit the ring we knew he was one we needed to own! We have bought Porter-O’Bannon boars before and they flat generate, so that excited us even more. Dig Deep went on to be named the Reserve Overall Champion Boar. We feel very lucky to own this one for $35,000 as we felt we would have to dig deeper in our pockets to bring this one to Clayton due to his unparalleled balance and build. Dig Deep is one that is square both coming and going and extra good on his feet and legs. For being stress negative and out of a pure Hampshire boar, we love his shape and muscle expression and anticipation of siring consistent, complete hogs that could go out and win shows! This one gives you and extra cool look to his front end while being so square and level down his top. Pedigree runs really deep here too as his mother is a littermate to the $11,500 Overall Champion Weanling Male and $7,000 Light Cross Champion Weanling Female at the 2010 Fall Classic. His grandmother is extra special in her own right as she is the mother of the 2013 WPX Jr. Show Champion Crossbred Gilt and is a littermate to J-LO (mother of Rename) at Brinning’s, as well as the popular boar Swamp Fever at Carl Kent’s. Special thanks to our good friend Bruce Kaufman on seeing the power this sire has and teaming up with us to own him! If you’re looking for the boar to make those easy selling babies that feed out well and win shows then make sure you Dig Deep!!!