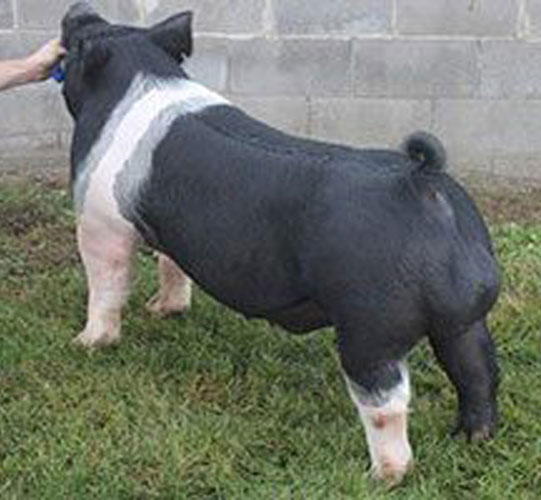 This is our $25,000 purchase from the Heimer ‘Chosen Ones Sale’ this fall. With the success and reception we had last fall on Ego, we felt it was a no brainer to go straight to the source and acquire a pair of boars from Jesse to put to work here. The success of both Full Strut and especially Swagger need little to no introduction and to have a boar with that kind of winning pedigree from the guy that produced the majority of those winners eliminates the guess work on the breeding value we feel this guy will have. His Black Attack grandma only sweetens the pot when it comes to the predictability of this boar, as she was a major influence for Jackson and now for Heimer. When visiting with Jesse about the boars this was one that we were way in on. He kept interest in him and has used him hard and we expect many banners to be hung by HH produced Lowboy hogs. We have already touched on his Full Strut X Swagger pedigree, but the phenotypic traits that Lowboy brings to the table are unparalleled. He is one that is moderate framed, short sided with big legs and big feet. On the topside, this one is tall fronted, dead level from blade to hip, and has an awesome show hog head to him that is always carried high and cocky. This stress carrier boar at the ground has an incredible hip and hind leg that can motor with ease. He’s always been an easier fleshing hog that should translate into easy, fun feeding show hogs. If you want to make elite show barrows that have winning pedigrees enriched deep in their blood then rise above the competition with Lowboy!!!