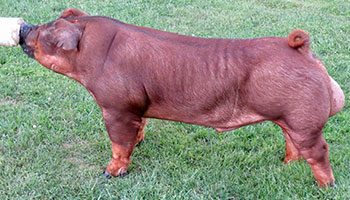 When opportunity knocks it’s usually a good thing to answer especially when it’s a sure fired, no brainer of a decision. With the immediate popularity of Stand Tall, we knew he would not be able to produce enough semen to meet demand this fall! Shortly after Louisville, Blane approached us about bringing his littermate to Crossroads and we immediately jumped on the idea. Sired by the $190,000 Record Selling Attention, and out of that potent Can’t Stop sow. She was a class winner at the NJSS in 2016 and part of a $25,000 litter that included another gilt that won her class at WPX that summer. The grand dam of this pair of boars is also a littermate to Keep Calm. Again a powerful pedigree that will generate on. At Ease is one impressive specimen in his own right! A stout constructed boar that is opened up in his skeleton with great shape and muscle. Big feet and big legs with a big even toes. Masculine in his skull and feature but still reads with a balanced look from the side. Tall fronted with good extension. Expressive down his back and pliable in his rib cage. Bold in his body with a big, square hip. True and square at the ground with good range of motion. The heavier muscled, bigger boned brother of the two. At Ease is a must use kind of boar that compliments his brother very well! Grab everyone’s attention then put them to rest with At Ease!!!