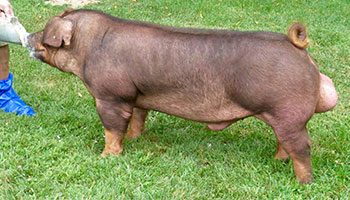 The Duroc boar show was power packed and deep on the green shavings at the 2016 Summer Type Conference. There was a great set of breed improving sires to select from and we feel loaded up strong! One of the headliners of this event was the entry from Don R. Smith. This Indian Outlaw x Royal Flush son created a buzz amongst breeders for his ability to combine heaviness of structure and flexibility of skeleton while tying in a great show hog look of length and extension to his front end. Bear Claw is our $35,000 STC purchase and is one that is massive in terms of back shape and muscle expression. He is big and bold about his center rib shape and has great depth of body while still maintaining idea length and extension to his spine. Square built at the ground, square in his hock with ideal foot placement. To add fuel to the fire of excitement, the littermate sister to Bear Claw was named STC Champion Duroc Gilt and went on the become the record selling Duroc female bringing $35,000! She was exhibited by Hadley Hendrickson and was purchased by Adam Beck & Family Showpigs. Indian Outlaw was not one that will have tons of numbers in the breed as this was his only litter, but his quality and legacy will make an impact! His generating ability comes from a deep litter as his sister was the 3rd Overall Gilt & Champion Duroc at the 2015 WPX! There is definitely generating power in the blood and we’re excited to be able to offer him to you! Just like the line from the Tim Mc Graw song ‘Indian Outlaw goes “All my friends call me Bear Claw,” be sure to call us and make Bear Claw your friend in the Duroc breed! This one will make an immediate impact!!!