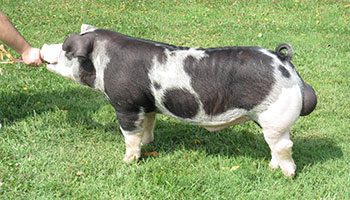 If you follow the spotted breed much at all, you are probably in the know that the name of Hill Showpigs and success have come in hand in hand with each other over the past few years. They have hung banners at the high levels within this breed and have done so repeatedly. They will tell you their success comes from their initial sow and the way they have been able to build off of her. When they do turn loose of a female she generates quite well for their new owner. When they brought out a boar, we knew we had to be in on him! Not only does this one carry their Dirty Secret foundation sow as his grandma, his mommy is a really good one as she was the Supreme Overall Gilt at the 2013 American Royal and Reserve Grand at the State Fair of Texas. His Built for Speed sire is the popular Moore hog from STC last year and has done a great job thus far. Break In won his class at the highly competitive spot show at the IN State Fair and not only brings a power packed pedigree to Clayton, but also lots of quality to go with it. This stress negative boar is impeccably built as he is tall shouldered, good headed, and jet level from the side. His athleticism on the go is impressive as he gets out and fill his tracks. Square made with big legs and feet. He possesses a good kind of muscle shape for a stress negative hog and is great in his color pattern. We feel Break In will offer a different pedigree to put back on popular line here and do it in a stress negative package. If you want a boar that is backed by tons of banners while having quality to produce his own then make sure knock down all obstacles with Break In!!!