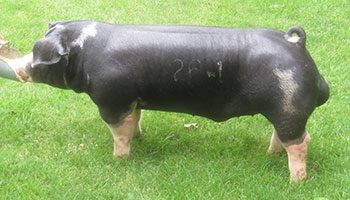 We decided this spring that we wanted to make our maiden voyage into the Poland breed. This is a breed that grows in popularity with every passing year and we frequently get asked when we were going to stud a Poland boar. We started the search this summer and found some interesting ones along the way but never just really got the feel that any of those were the one. When IN rolled around our phones started ringing off the hook the night before the show about one that had arrived in Indy from Lambert & Crone. Well respected breeders of the breed were telling us there was a must own laying there in the barn. On show day we were there in attendance and had been told the hog had tightened up on them and wasn’t getting around like he had been when he got there the night before. The hog still managed to finish second in class and received lots of positive comments from the judge. Bestowing our trust in the breeders of the boar and the many that saw him the night before we went ahead and purchased the boar and are ecstatic we did. When we got him home that evening he bounced right up and off the trailer. Not quite completely right, but close to 100%. By the next couple of days, he was 100% and rolling. Caddyshack is one that excites us about our step into the Poland breed. Not only is he an outcross (Titleist X Done Deal) to the popular lines today but he offers a lot of positive directions a guy can go. He is stout in his bone work with big feet and toes. He is square and wide underneath and maintains that up high. Square and shapely down his top that reads with barrow muscle and shape. He is a tall fronted extended kind of a boar with lots of power. Caddyshack reads with a great look to his front end and is sound and flexible when put on the go. If you want to hunt down that prize and conquer the unconquerable then make sure you put your trust in Caddyshack!!!