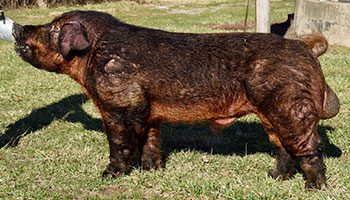 We’re firm believers that things happen for a reason and more times than not work out the way they were intended. The 4 litter of Durocs born in July of 2015 will always go down as one of our favorite litters ever born at Adam Beck & Family Showpigs. A litter that yielded some huge results and herd impacting individuals. We fed a pair of gilts from that litter for the 2016 NJSA Southeast where they went on to be named Champion & Reserve Duroc Gilts! The Champion ended up being selected Grand Overall Gilt shown by Clay Kincaid. We retained every female in that litter and they have become key components of the ABF Duroc program! There were only 2 males in that litter one being a Barrow we sold to Texas that won his county show and the other being the boar we now call Chow.
Chow was a standout from day 1 and was one that we had full intentions of leaving intact. He got very sick in the nursery and never fully grew out of it to have ready to go for that spring season. With Shiftin’ Gears still rolling strong at the time, we decided just to keep Chow around the farm and use for a heat check boar. Chow’s mom is our foundation Duroc sow as she is our $13,000 purchase from Mike Bond at the 2013 Fall Classic. Not only making this particular litter of pigs, she has also produced the Grand Overall Gilt at the 2016 American Royal! That kind of sow power behind him only made it easier to hang on to him. Chow had always been discussed to sample of some sows and it wasn’t until the summer of 2017 that we did exactly that. The results were incredible as those 2 litters we had produced the Champion Duroc Gilt in the Open Show at 2018 San Antonio, Reserve Duroc Market Hog 2018 Dixie National, and a Class Winning Duroc at the 2018 National Western! Chow will definitely see more sows at our place going forward!
Chow impresses us for his height of shoulder, levelness of design, and sheer athleticism. Huge bones and big feet while being square and true at the ground. Muscle shape is impressive as well. He was always good bodied growing up and seems to be passing that along as well! Awesome, trendy look to his front end. We think Chow can bring life to the party at the backdrop!!!