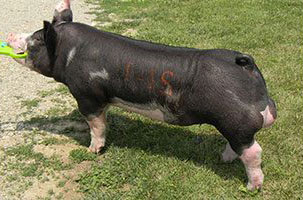 Dead Man Walking comes to us as a class winner from the 2012 Ohio State Fair. He is one that has winning pedigree and hails from a deep litter! A pair of his sisters has racked up quite the successes in the show ring one being named Champion Berkshire Gilt in the Junior Show at the Ohio State Fair as well as many time Champion or Reserve Berkshire Gilt in the Ohio Jackpot Circuit, while the other one was Reserve Champion Berkshire Gilt in the Open Show at the Ohio State Fair and a numerous time Champion or Reserve Berkshire Gilt on the Ohio Jackpot Circuit too! Dead Man Walking has us excited for the potential he has to make super competitive Berkshire show hogs as he is packed full of shape and muscle, stout in his bone, and flexible in his build. He is one that comes at you wide and leaves you the same way. Jet level in his skeleton and choke fronted thru is head and neck. Study this one from the top side and you will see his enormous hip, massive back and big blade. Watch him at his base and you will be in awe with his monster chest and impeccable width going away. We feel Dead Man Walking will be a key ingredient to the Berkshire formula here at Crossroads to work on Black Magic daughters and he couldn’t be happier to have him on stud.