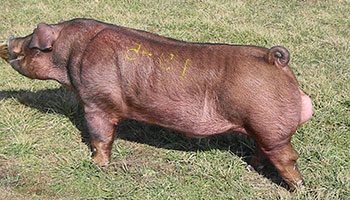 The most talked about boar in the early part of 2012!!! Earthquake was the Champion Duroc Boar at the 2012 Winter Type Conference where he turned heads and caused uproar due to his attributes never before seen by many along ringside. Quite simply put, Earthquake is a freak of nature when it comes to the positives he brings to the table. Never before have we laid eyes on a red boar with this much natural muscle mass and width of skeleton! To quote our good friend Ralph Doak “He is the biggest bladed, heaviest boned, widest chested, most massive animal I have ever seen of any breed!” He is one that is incredibly stout being jumbo legged with great big feet and square even toes. Study this one’s build and you will see that the set to his angles and to his joints are correct and where they need to be. The mass and power tied with the dimension and volume this guy has is impressive! Finally, for the ruggedness and stoutness this guy possesses, he is so cool fronted with excellent extension to his head and neck. Earthquake is definitely the most different boar to come thru the Duroc ring in some time! Change is often something that people are too hesitant to jump on and try. We would like to generously thank the Rodibaugh’s, Range and Theobald for tying into this genetic giant! Don’t be left hanging on for dear life when the Earthquakes are rumbling through the showring for years to come!!!