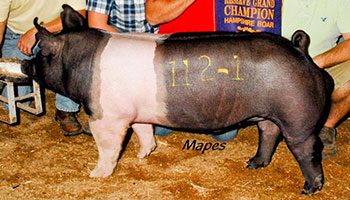 We would like to first off graciously thank two very well respected hog breeders in Robert Wehmer & Family and Dean Myhre for teaming up with us on the big time Hampshire boar. Game On was the $23,000 Reserve Champion Hampshire Boar from the 2012 Indiana State Fair. This one has a true foundation female behind his pedigree as his mother was the Champion Hampshire Gilt at the 2011 Indiana State Fair Jr. Show. We had the opportunity to view this one at the farm prior to the state fair but had to wait to own him in Indy. It took us a nice little chunk of money to secure this one but we couldn’t be more ecstatic that he came home with us! Game On is a true powerhouse for the Hampshire breed in terms of width and dimension combined with muscle and stoutness. This one is truly busted open both coming and going and maintains that width to his topside. He is massive and dimensional in his rib and center body and dead level from the profile. Heavy boned, big footed and sound and flexible as they come sums this impressive Hampshire specimen up. Whether your one that likes to make Hampshire barrows that can go out and win hog shows or make a killer set of elite females then here is the game you need to play! We put the ball in your court so now it’s up to you…Game On!!!