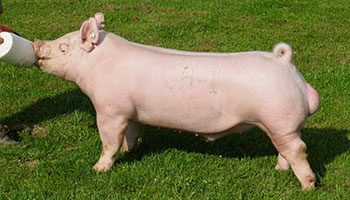 The buzz around the Yorkshire ring at the Summer Type Conference in Louisville was at an all time high due to the quality set of boars that made their way to the air conditioning. A very strong show on the green shavings had Yorkshire enthusiasts buzzing about the real good set of boars that showed up there. A new world record was set, lots of boars found new homes at good values while some flew under the radar. They say all things happen for a reason even though unexplainable at times. This is exactly the case with the purchase we made. While we all wanted that one that broke the record, we also had our eye on another one that exhibited some hard to find traits. The Lorenzen entry that was 2nd is class, presented some real cool parts and pieces for a Yorkshire boar. One that has extra look and extension with a killer, dead level presence from the side. He runs up hill from a design standpoint and offers that extra length of side. One that is built incredibly well at the ground being square and true about how he handles his skeleton. Great flex and reach off both ends while being extra mobile out of his hock and strong on his pasterns. This one is right for the times when we want hogs that are extended and cool looking while still having great shape and mass. Hear Me Now has a little different pedigree too as he is sired by Kum N Go, the In Time son at Hi Point, and out of a Bone Buzz sow. His mother is also a littermate to Almost There, the $30,000 Bone Buzz X Power Drive son also at Hi Point. That’s a loaded pedigree with good, old Yorkshire boars; while splashing in a shot of new blood. We’re excited about the possibilities of Hear Me Now and what we think he can accomplish. Special thanks to DJ Sanders for teaming up on this one with us. Leave your contemporaries scratching their heads on your way to the back drop by asking them if you can Hear Me Now!!!