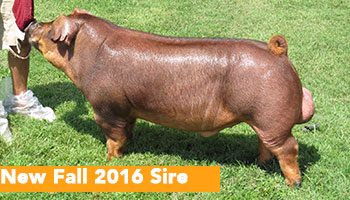 Often times when we get asked to judge, they end up being shows where we have to opportunity to purchase animals also. That was the case with the IL State Fair Breeding Stock Show when Adam was given the opportunity to judge. HONORARY was named the Champion Boar and was brought to Crossroads. Huge middled with a big, bold rib cage and great mass. Big boned and sound footed. Tall fronted with a stout look. We think this one will make really good Durocs that have the extra mass and dimension. Become the star of the show with HONORARY!!!