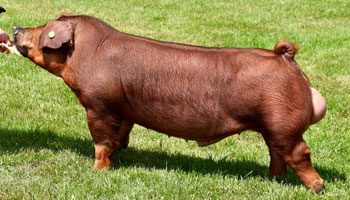 JUST ONE MORE X HE’S THE ONE X LIL DIRT

There aren’t many more names synonymous with producing high caliber Duroc boars known to generate than Norman Brothers. Producing boars like He’s the One, New Direction, Class Act, and Twister; they’ve impacted the breed majorly over the last couple years. The Duroc show is always loaded at WPX with lots of quality & depth and Norman’s were given the task to line it up. While there were lots of big time boars shown there, our favorite came via they’re judge’s consignment! A boar that we’d been made aware of prior to Expo, he hit us extremely hard when we saw him. One that brings lots of things to the table that we can offer alongside an already stout set we have assembled. Justify is one that is extra sound and mobile in his skeleton. Flexibility and range of motion off both ends is quite impressive. Square at the ground with a huge chest and ideal in how he handles his rear leg. Heavy boned and big feet comprise his stout skeleton. Tall fronted and extended paint an awesome picture from the side. Slick neck and long faced while being level from blade to hip. Muscle shape and body mass match and blend perfectly. We think this one reads like a generator! Sired by Just One More, Justify ties together a powerful pedigree with many potent sires like Lifetime Light ‘Em Up, and Royal Flush combined in there. The mother of Justify is a bright young sow in the Norman herd. She has already produced the Reserve Champion Duroc Gilt at Houston in 2018! Sired by He’s the One, Littermate to New Direction, brings more potency to the blood! Justify has us excited for the future of our Duroc program as we feel he can make a huge impact! Named after the Triple Crown winning horse from this summer, we feel Justify is bound for greatness!!!