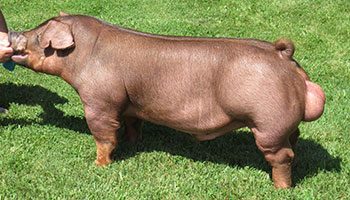 When we made our annual trip to Sibley to go thru Beyers Farms and to pick up Different Deal, Brett had told us about a young boar he had there that we needed to see. Already adding 6 new Durocs to the battery since expo, another red wasn’t necessarily a high priority but when he ran this one out it immediately became a necessity that we take this one home too!!! Lead Off, as his name implies, is exactly that caliber of boar! A legit headliner in a deep set of Durocs on stud here! Extra stout in his feature with huge bones and feet. Busted open with width and power and gets out and handles it with ease. Extra good look up front with great shape of muscle in a moderate framed package. This one will make a for sure impact! Sired by the late Franchise, a Lifetime son that Beyers had, and out of a Shiftin’ Gears sow. She was the very successful show gilt for the Rash Family last summer that was numerous time Grand Overall on the ICPA! Lead Off comes from a great litter that includes the Sam Smoot barrow that was Reserve Grand Overall at the highly competitive Delaware Co, IN 4-H Fair along with being in the top 5 of his division at Louisville! A littermate sister was campaigned successfully for the Wheeler Family in IL on the ICPA and another littermate was the Reserve Champion Duroc Barrow at the California State Fair! Power in the blood on both sides! We are beyond excited to have this one here and be able to offer him to you. This one will be very popular! Lead the charge to the backdrop with Lead Off!!!