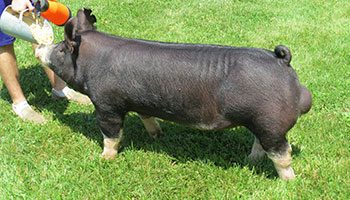 Pick Pocket is the Reserve Champion Berkshire boar from the 2013 STC bred by Nick & Neil Mauck. He is sired by Shoot to Thrill who was the $62,000 Record Selling Berkshire boar at the 2012 NBS and his littermate sister was the Foundation Female donated by Mauck’s at the 2013 Team Purebred Summer event. Pick Pocket is a boar we absolutely love from a design and balance standpoint. Where we feel he can help Berkshires is that he is tall at the point of his should and level back thru his hip. He gives you a great look about his head and neck and is square in his build and extra good on his feet and legs. The Black Magic mother in his pedigree sweetens the pot as she was the $3,200 Class Winning Gilt at the 2010 CPS STC shown by the Pilcher Family. We feel this one exemplifies the traits needed to go out and make Berkshire hogs better so sneak up and rob the competition with Pick Pocket!!!