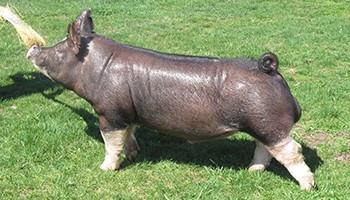 We do not always get the opportunity to see every boar we place into stud at an early age and at different points along the way as they mature but when we keep prospects at our farm, we get that luxury obviously. This is one that from a very young age, we knew would be a special one! Sired by the late Smokin’ Gun, that boar left us too early and did a great job in his short time. The Kentucky Lovin’ mother is about as good as it gets from an ABF genetic standpoint as she is full sib to Kissin’ Cousins and along with her sister are becoming building blocks for the Berkshire program here. The mother of these boars is becoming a key contributor quickly as we have kept 7 daughters and last summer her litter went on a tear producing the Reserve Berk Gilt at Indy in the Jr. Show and all were Champion at their county with one being named Reserve Overall. The other sister is the dam of the many time Champion Berk Barrow on the ICPA in 2015, the Reserve Sr. Division Gilt @ Indy Open Show, and a Class Winning Gilt @ Houston this spring. A littermate sister to the boar was the 5th Overall Berk Gilt @ OYE this spring and was also Reserve Champion Berkshire @ the Team Purebred Mid-South Regional. Smoke & Mirrors is the kind you will dig immediately if you like hogs that run up hill and have great show hog presence. He is one that is great from the side being level built and awesome designed. He’s square and opened both coming and going and square in his build. Stout featured and heavy boned with big feet. Great in his muscle pattern being expressive and crisp made. A notch more extended and bigger in his kind than his brother but one that still packs a powerful punch. Smoke & Mirrors is one that we can see making a bunch of big time show gilts and still making those stout kind of show barrows. No hidden secrets or gimmicks here. If you want to make a strong showing in the Berkshire arena, do it with a little Smoke & Mirrors!!!