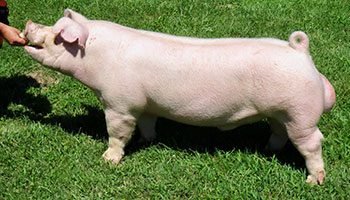 Quality livestock that possess unique traits to make the next generation better never go out of style! Boars that present themselves as ones that can move the breed forward are highly sought after. Where they may not be as extreme in certain areas allow them to excel in many others. Our Chester White purchase from Springfield is one that could most certainly fit in this detail. A boar that is a pure athlete in how he handles himself while exemplifying an impeccable design and stout skeleton is hard to make in this breed especially. Track Star is simply as his names implies, one that can absolutely get out and move. A true athlete in ability to be extra mobile and fluid when set into motion. As seen in the show at Springfield, this one has a real quick step that can cover some ground in a short amount of time. Very square and true in how he hits the surface and drives off his hock. One that incredibly heavy structured with huge legs and big feet with strong pasterns. A tall front boar with good show ring look and a dead level presence from the side. Track Star is one that is extra pliable in his rib shape and center body mass. Bold and opened up in his skeleton. Smooth kind of muscle that isn’t as crisp as some but compliments himself very well. A superb boar that we feel can make some progress. Sired by our wildly popular First Take boar, he has been off to a fast start and was one that we felt we needed to lay in a couple sons to keep that ball rolling. The mother of Track Star is an Ein X Bonecrusher. While this is his mom’s first litter, his grand dam has been a real good generator. Sired by the legendary Bonecrusher, she is not only a littermate to the Champion Chester Barrow at the 2014 IN State Fair, but she has also produced the Reserve Champion Chester Gilt at the 2017 OYE. A full sib to her also produced the Champion Chester Gilt at OYE in 2016 & 2017. Definitely a power packed pedigree proven to win. We want to give a special thanks to Miller Farms for teaming up with us on this one! If you want to rise your Chester program to the top, make sure you do it with a Track Star!!! 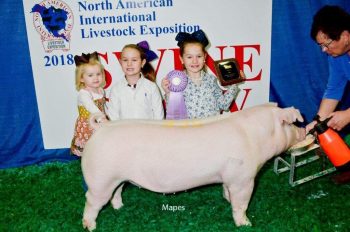