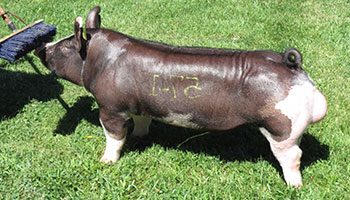 Two Face comes to us as the second half of the tag team duo of Berkshire boars we purchased at Indiana. Bred by new up and coming breeders McCarthy & Wells Showpigs, this Kentucky Lovin’ son garnered the honors of Reserve Jr Division Champion. He is a littermate to the highly successful Berkshire gilt shown by Ethan Wells this summer as she was named 5th Overall Berkshire Gilt at Springfield, won her class in the Jr Show at Indy, and was named Reserve Berkshire Points Gilt on the IJSC. Kentucky Lovin’ is a boar that has been extremely popular since we’ve gotten him here and we felt this is another son that we needed to lay in here next to daddy and Kissin’ Cousins. This one caught our attention for being a high head carriage boar that demanded attention due to his show ring presence. He was level from blade to tail with awesome muscle down his back and into his hip. Two Face comes at you with an enormous chest floor that’s square and true. He has monster bones with great big feet and can flat motor on all four. Unique in terms of color pattern to his face but awesome in terms of build and muscle for this breed. If you want to make those shapely, easy selling Berkshire babies that are fun to feed then play both sides of the game with Two Face!!!