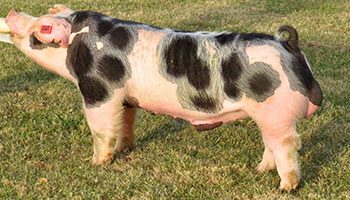 The spotted boar show at the Fall Classic has been known to surface several boars that have went on the impact the breed in big ways. Usually known as the spotted boar show of the year, 2017 was no different. There were a handful of sires that again stood out amongst the rest. One in particular caught our eye and was a favorite of many around ringside. The Strong Arms son exhibited by POT Genetics was the one we set our sights on owning. A big thinks to Val &amp; Dakota Reiss for wanting to buy a part of this one with us. Up In Smoke offers a litter different twist of a pedigree from today’s mainstream lines; being sired by Strong Arms housed at Bob Listens. He was the Armstrong boar that Bob purchased at Belton in 2016 and has the pedigree of Ooh-La- La X Pack A Lunch. The mother of Up In Smoke is sired by the dominant Loud Mouth and is a littermate to Mouth Off. Up In Smoke is stress negative and had a pair of really good littermate sisters at the show as well; one being the second top-selling gilt @ $3,000! Up In Smoke offers a cool combination of stoutness and design. Huge bone and foot with a stout skull that is still long and extended. Tall fronted and level from the side with that ‘run up hill’ presence to his front end. Square in his chest and correct in the way he leaves you. Range of motion and set to his hock and hind leg is superb. One that can get out and move across the surface. Square and bold up high with great muscle shape for a negative boar. Up In Smoke is pliable in his rib and robust about his hip. This is one that should pass on that trendy look while keeping them stout. Loud marked color pattern only makes him standout even more. One of the most exciting spotted boars we’ve owned! Burn down all competitors and leave them Up In Smoke!!!