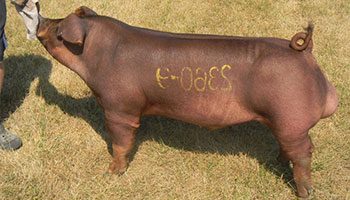 Going into the Indiana State Fair, we weren’t really in search of a Duroc boar until we laid eyes on the Holloway entry! When The Duke hit the ring we knew he would be a great fit to add to the trio already in place. He offers a fresh breathe of air to the Duroc bred in terms of a pedigree standpoint and should be a great outcross to most of the boars out there. He was named the Reserve Champion Senior Boar due to his added stoutness of skeleton, smooth and crisp muscle shape, and flexible skeleton. He is one that’s extra good from the side being dead level in his build and clean and extended in his look. The Duke has a massive shapely hip with a big square top that has a ditch running from his blade to his hip. Tie in his athletic stride when on the move and we feel like The Duke can make sound, shapely red hogs that are easy to sell and tough to get around. Named after the great western actor John Wayne, we feel that offspring out of The Duke can earn the same reputation he did in his movies and be some “tough hombres” that you wouldn’t want to cross paths with in the showring!!!